Animal in My Attic 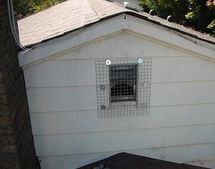 Q: What could it be?
A: It could be either a squirrel or a raccoon, depending on the time of day and the type of noise you hear. Squirrels are active throughout the day, so you will typically hear scratching and running off and on during the day (sometimes into the early evening). Whereas raccoons are nocturnal, therefore it's normally quiet throughout the day, with activity increasing at night. You will often hear thumping sounds as they leave for "dinner" around 10:00 pm and return around dawn. Animals seek out attics, either in late fall as a warm winter den or in early spring as a safe haven to have their babies.

​Wildlife move closer to human habitation during the birthing season because it is much safer to have their vulnerable babies away from other animals. Any time between March 1st and October 1st it is safe to assume it is a mother with babies. Squirrels can have their first litter as early as late February and, at that time of year, there is little protection for their young given the lack of leaf cover for nests. Babies left in these nests would be quickly preyed upon by birds and other animals.
​
Q: How could they have gotten in?
A: Raccoons and squirrels can gain entry into a roof through a weak spot or opening in a soffit or fascia (the overhang), loose shingles, a roof or gable vent, or where two roofs intersect.

Q: Will they leave on their own?
A: If it is during the birthing season, the good news is that it is a temporary situation. Once the babies are bigger and less vulnerable and there is leaf cover, the mother has alternate safe options available. When babies are weaned (typically around 8 weeks old for squirrels) and following the mother out to learn how to forage, it is no longer safe for them to be close to people. By that time, we are more active outside our homes which further encourages mothers to move their young to a more natural area away from humans and pets.
​
Q: What can I do to get them out?
A: During the birthing season, we recommend giving the mother a temporary grace period to raise her young to the weaned stage so that they are coming out with her. She is the insurance needed to get them to that stage and it is the least risky solution from the homeowner’s perspective. Actions to barricade the mother from the attic or to trap and relocate her can have serious consequences for the homeowner. Nests are generally in inaccessible spots near the eaves and if babies are orphaned and hungry, they will move around in search of the mother and can fall between walls, creating the need for expensive drywall removal to get to dead or dying animals. Even if the babies are recovered, the homeowner will be left with the option to do the care themselves or have them euthanized. After giving a grace period and babies have been noted coming and going with mom, you can start a feeding regime to encourage them to leave the attic sooner.

For squirrels, you should use large striped sunflower seeds (do not use peanuts as they will simply stash them) and place a pile on the ground in a strategic spot where the animals come and go from the roof, so they will be easily found. Put the seed out early in the morning and continue to put it out at the same time each day, moving the seed slightly further away from the house so that the animals are gradually being lured away. After about six days and when you see that mom and all her babies are out eating the seed, animal proofing can be done using 1" (1/2" for red squirrels) welded wire mesh (sometimes known as hardware cloth) between 16-19 gauge secured over the entry point. After the proofing has been completed, make sure to stay around the house for the rest of the day and the following day to listen in case one is trapped inside. If that happens, the site will need to be re-opened to let it out.

For raccoons, once the babies are old enough to travel with their mom, she will begin to take them out around dusk, so at this time you can start a feeding regime. Use dry cat kibble, set it out in a bowl at dusk, and then follow the same method used for squirrels. Once you are confident that the whole family is out, the proofing can be done using 1" welded wire mesh (16 gauge). Since the raccoons only go out after dusk, you might have to encourage them to leave by opening the attic hatch a few times during the day and shining a light in their direction, along with making some noise. You may have to consider a temporary repair if it has to be done after dark, leaving the full repair for daylight, but only after you are certain they are no longer in the attic.

When doing animal-proofing under any circumstances, consider hiring a general contractor to do the roof work if you're not comfortable or do not have the proper equipment to safely complete the job!
Remember that wildlife, like raccoons, are very strong animals, so you must use the proper materials to repair entry points and affix these materials in a manner that will keep animals out. The 16 guage weld-wire mesh that is recommended needs to be held in place using washers and heavy long screws as depicted in the diagram.


Q: What damage can they cause if left in the attic?
A: It is never recommended that you leave adult animals in an attic over the winter. As of late September, when all babies should be fully grown, it is advised to use the feeding regime to get them out and then complete the animal-proofing. On the other hand, anytime between March 1st and October 1st, always be aware of the likelihood of babies being involved and, most importantly, never take an action of barricading anything, unless you are confident that everything is out!