Animal Under my Step 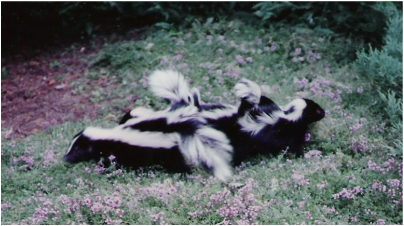 ​
​Q: What could it be?
​A: Typically skunks and groundhogs dig underneath steps and sheds in search of a denning site. Raccoons will sometimes den underneath such a structure if it is slightly raised, although they prefer to den high up and are not burrowers.
If you notice activity during the daytime then it is likely a groundhog. If the activity is at night then it is more likely a skunk as they are nocturnal.
​Q: Will it always live under there?
A: During the spring (often beginning as early as mid-March but can occur as late as the end of June), pregnant females will seek such shelters in order to provide a safe haven for their young, away from predators. In late fall with the onset of winter, animals will do the same in order to find the protection and warmth necessary to survive the winter months. Generally, such situations are temporary in that the animal will not become a permanent resident. Once babies are weaned and old enough to leave with their mom she will move them to a more natural setting. Groundhogs are true hibernators whereas skunks remain a bit active but reduce their activities significantly over the cold months. 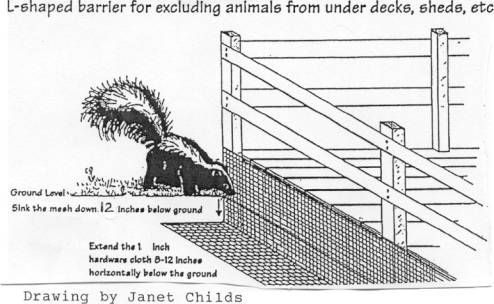 Q: How can I effectively solve this problem?
A: The only effective way to deal with this problem is to do the necessary animal-proofing, which entails closing off access to the structure. Of course, doing the proofing at the right time of year is crucial in order to prevent trapping an animal inside. If that happens and there are babies involved, they would die under there, creating a bad smell that would linger for a long time or, in desperation, an adult would find a way to dig out and in doing so would have figured out how to dig around your proofing in the future. Babies are born as early as mid-April and as late as the end of June. Newborns have their eyes closed and are not mobile until they are approximately 8 weeks old. On your calendar, mark 8 weeks from the time you first noticed activity. After 8 weeks have passed, place a ball of paper towel in the hole. If the paper towel has been pushed out then the animals are still living there. Since the babies are now mobile it is safe to try some deterrents (you do not want to use the deterrents too early in the birthing season as you do not want to scare the mom away leaving her babies in the burrow as they would not survive without her). The deterrents include: After the deterrents have been used for approximately 5 days, try the paper towel trick again. If the paper is not moved for 3 full days, you can assume the animal(s) have moved on. The area can now be properly animal-proofed. The first step is to dig a trench around the base of the structure on all of the sides that the animal could dig. The trench should be approximately 1 foot deep and 1 foot wide and the material you should use is 1" x 1" welded wire mesh (16 gauge), which is available at most hardware stores. Do not use chicken wire as it is too weak. Secure the welded wire mesh to the bottom of the structure and run the mesh straight down into the trench and then bend the mesh at a right angle, away from the structure, to cover the bottom of the trench. If you want to make sure an animal has not moved in during the proofing, leave one access point open and use the paper towel trick before sealing this last point. As a final check after the proofing is completed, put a piece of cooked chicken or a sardine inside the proofing for a skunk or a piece of broccoli or apple for a groundhog. Check the food source the next day and if it has not been eaten this indicates there are no animals under there. If the food has been eaten then the final spot has to be reopened to allow the trapped animal(s) out.
It is too risky to do any proofing between early October and mid to late March as this is when groundhogs are hibernating and skunks are less active. In early spring you want to be seeing some activity around the burrow before you start proofing, be mindful though of the birthing season.
​​Q: A skunk has sprayed around my house leaving a terrible odour. What can I do?​
A: Spraying will sometimes occur during the mating season (January/February) or when one skunk has entered another's territory. It is not a frequent occurrence as skunks don't want to draw attention to themselves. If it is around the outside of a dwelling, the concrete foundation will act as a wick in drawing in and holding the smell. Cold air return vents will also allow the smell to enter the house. You can use a product called Skunk Odour Eliminator which is sold at most pet stores. It can be diluted or applied directly to the area that has been sprayed. You can also mix together: Place these ingredients in a water bottle and spritz. Be careful as it does have peroxide in it. If you are concerned about discoloration of any furnishings you may want to test it on a hidden area first. Opening up windows and turning on fans will help to circulate the air.
STOP- DO NOT TRAP AND RELOCATE THE ANIMAL- Click here to find out why